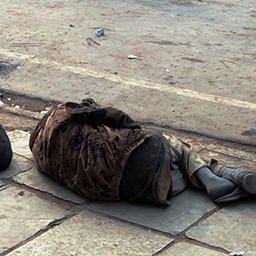 Recently, an itinerant was shot by the police in Montreal. The man was described in the media as having university education and mental-health problems.

Since a few years, I have noticed aberrations between the world of the homeless people and the world of scientific research.

There are significant investments in the scientific world to monitor animal populations. For example, many scientists will band birds to follow their population. They will also put transmitters on animals to learn about their migration. So far, it’s not a problem.

For the itinerants, what do we do? We have people who have been to school, work, and who one day find themselves on the street. Between the time these people were integrated into society and the time they got in the street, what have we done to follow them?

Yet they were citizens who had a value to the society. It is absurd to think that we are deploying huge sums in monitoring endangered species, but do almost nothing to keep track of people in danger.

Are we doing enough to follow the people before they become homeless?