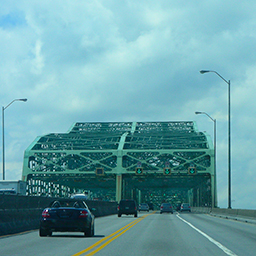 The toll of the new Champlain Bridge in Montreal creates a debate among Québécois.

Problems that are expensive

Basically, the problem is that citizens already pay taxes for infrastructures and the government asks them more money to pay for the new infrastructures. Here are more precise problems that I see by this kind of approach.

Higher taxes and cost of living

We already pay a certain amount of taxes. People who will use the new Champlain Bridge will have to pay their transit in addition to paying the same amount of taxes they already pay. In the old model, people were already paying taxes in addition to paying for their transit. In 1991, the government decided to abolish tolls and to finance infrastructures directly by taxes collected. People paid more taxes, but no more tolls. Today, people pay an amount of taxes already very high and the government is asking them to pay for crossing certain bridges without reducing the taxes of citizens.

For the bridge Olivier-Charbonneau, the cost is $2.48 per transit at the rush hours for users with the transponder. For about 260 transits (about five working days per week with two transits per day), this is approximately $1,290 per year. This is probably the insurance premium that people pay for their car.

Let’s consider the last example and let’s add the new Champlain Bridge. Imagine a driver crossing the two bridges. The cost would be about $2,600 per year. Several bridges could require a toll in the coming years as they are being replaced. It’s not rare in the Montreal area that adriver crosses two bridges for getting to work. With costs like these, drivers will pay the equivalent of another insurance premium, their car a second time or even both!

In a few years, a driver traveling from Laval could cross the bridge Olivier-Charbonneau (between Laval and Montreal) and the future Champlain Bridge (between Montreal and Brossard) at a similar cost than needed fuel for the ride (even with the transponder).

Infrastructure tolls generate additional costs to collect money. In addition to paying a bridge or highway, citizens must pay for managing the infrastructures. These management costs could be avoided if the government managed directly the costs through taxes.

For a bridge or two at the provincial scale, it will probably not create very high management costs, but imagine that each bridge and highway of the province askstoll. That’s a lot of unnecessary management and costs to collect money directly from the pockets of drivers.

The fact of adding tolls and transponders to collect money from drivers creates a complexity for them. That requires them extra time that could be avoided if the government collected taxes directly in overall taxes.

Let’s consider a concrete example. The new bridge Olivier-Charbonneau of the Autoroute 25 requires a toll since its construction in 2011. Users can cross it at a higher cost without a transponder. The higher cost includes management fees. For regular users, the acquisition of an electronic transponder allows to register transits at a lower cost.

The transponder is not a bad thing, but think about the trouble for drivers who have to cross several bridges. They’ll need a transponder for each bridge!

Furthermore, that penalizes people form outside who come in the Montreal region by car. Likely that people visiting the area will not get a transponder and they’ll pay the maximum price. That creates considerable additional costs.

Who really benefits from the toll?

There is a principle where people pay taxes to the government to develop the infrastructures. It’s a common good. Usually, we don’t pay individually for each segment of road that we use. People have accepted the idea that we pay taxes in a general way to manage the infrastructures (including several public services) with these taxes.

Our current model includes two modes of payment for the infrastructure: paying individually each infrastructure and paying globally for the entire infrastructure. Our taxes pay for the majority of road sections. Only a minority of sections is private and requires a toll.

Furthermore, let’s ask the question: why paying for bridges and not boulevards? From my point of view, there are two reasons. First, the bridges are among the most expensive infrastructures. The government is in debt and unable to pay for new bridges and that’s why he introduces tolls. Second, the bridges are very limited access. If a driver wants to avoid a bridge, the alternatives are relatively far. Unlike boulevards and secondary roads, bridges represent access with little or no alternative. It becomes easier to get citizen paying.

All this makes me to think that the government is implementing a toll system to be able to pay for the new bridges because it doesn’t have the financial resources to build them. Several bridges are already in a frightful state with very high maintenance costs. One way or another, we will pay for the bridges. The big difference is that we will pay for the management in addition to paying for bridges.

Imagine that all the bridges in the Montreal area ask for a toll. A person could easily crosses three bridges (the North Shore to the South Shore) back and forth and it would cost about $14 of toll in addition to fuel.

Infrastructure funding seems to have worked for several years without toll (since 1991). Today, we’re going back to the old model with additional costs. Based on the figures above, we can see the extent of costs that may be comparable to paying its fuel, insurance premium or vehicle twice. This could represent an enormous cost in the coming years for all drivers.

Do you find unfair to pay for each transit? Generally, do you think tolls will improve your life?