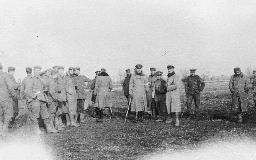 British and German troops meeting in No an’s land during the Christmas truce.

A few years ago, I was listening to the radio and the host told a Christmas story. It was a sad and hopeful story at the same time as I had never heard. The story told that at Christmas Eve during the war, soldiers began to sing in the trenches. Soldiers of the enemy clan began to sing in turn. The two clans emerged from the trenches to meet and have a dinner together. The two enemy clans celebrated together in peace. During the days that followed, the routine of war resumed and soldiers of every nation went back to the war with its consequences. This story has changed my way of seeing the war.

What is the Christmas truce?

According to the records, the Christmas truce represents several ceasefires during the Christmas period between the French, British and German troops during the World War I in 1914. The ceasefires were the initiative of soldiers on the front. During this period, the soldiers came out of the trenches to celebrate. Christmas trees were placed along the German trenches. German and British soldiers met in the middle of the no man’s land devastated by bombs to sing Christmas carols and exchange gifts. These events lasted for a short period until the military authorities put an end to the truces.

What lesson should be learned from the Christmas truce?

During the holiday season where people are generally more sensitive, these events have emphasized more the true human nature. This nature is often stifled by military orders that come from the direction of the country. The direction of a country is a few individuals who give orders to thousands of soldiers. What soldiers do is not necessarily the reflect of their intentions, but rather what comes from the direction.

If we let the soldiers managing the wars, I think we would not have the same wars. Nobody wants to die at war. Nobody wants to kill strangers and innocent victims. Soldiers are without doubt in the best position to decide about their future. Unfortunately, they must obey the leaders.

This historic event should inspire us. It should become a tool to prevent wars. Like the soldiers celebrating in peace when leaving the trenches, what are we waiting to make each war day, a day of Christmas truce?